The electronic affinity of the astatine is finally known

Result of a collaboration initiated between theoretical chemists from the CEISAM laboratory (UMR CNRS 6230) in Nantes and experimental physicists from CERN in Switzerland, the determination of a fundamental property of astatine, its electronic affinity, has become a reality 80 years after the discovery of the radioelement. This work was published in the journal Nature Communications (30 July 2020). 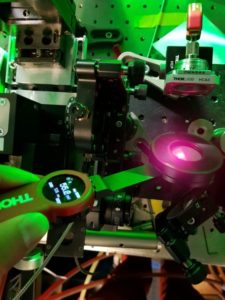 Astatine, discovered and produced in 1940 by nuclear synthesis, is one of the rarest elements in nature. The quantity of astatine present in the Earth’s crust is estimated to be less than 30 g. Conventional spectroscopic tools are unsuitable for the study of minute quantities. CERN’s photodetachment laser spectroscopy facility has made it possible to circumvent this problem and make the first ever measurement of the electron affinity of astatine, i.e. the amount of energy released when an electron is captured by the atom. In particular, this atomic property determines the chemical reactivity of an element and, indirectly, the compounds it forms and the stability of its chemical bonds.

The experimental measurement of electronic affinity has been validated by relativistic theoretical calculations of quantum mechanics, carried out at the highest level of sophistication, i.e. with a minimum of approximations. Accurate knowledge of the electronic affinity of astatine should make it possible to better anticipate the stability of astatine compounds, particularly those currently being studied by Nantes research teams for applications in cancer treatment.

Modelling studies, partly carried out at the Chemistry and Interdisciplinarity, Synthesis, Analysis, Modelling laboratory (CEISAM, UMR 6230 CNRS-University of Nantes), have been supported as part of the Programme investissements d’avenir (Labex IRON and Equipex ArronaxPlus).