Contact
Arronax Nantes > Training activities > Our news > Are you doing your internship at Arronax?

Are you doing your internship at Arronax?

Maxence Rayer and Valentin Giordano spent six months at GIP ARRONAX from February to August 2022. As part of a Master 2 internship in “Ionizing Radiation and Medical Applications”, each of them contributed to the development of research for the benefit of nuclear medicine. 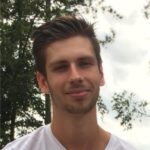 Maxence worked on the production of terbium-155, a theranostic nucleus that could be used for both medical imaging and therapy. “The first step was to perform some production cross section measurements with a deuteron beam on a gadolinium-155-enriched target,” the student explains, “because there was no experimental data available in the literature.” The ten measurement points were used to refine the shape and profile of the effective cross-section curve for this element. Maxence then set about preparing the target with gadolinium oxide powder, trying to determine the optimal thickness of the pellet to obtain the best possible yield of terbium 155 while limiting the production of impurities such as terbium-156 or terbium-154. Maxence is grateful to his supervisors, researcher Thomas Sounalet and doctoral student Yizheng Wang (Subatech laboratory): “they were very present and helpful throughout my internship, always available to answer my questions.” 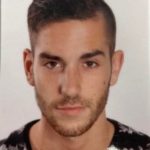 Student in the same class of the Master 2 “Ionizing Radiation and Medical Applications” (Nantes University / IMT Atlantique), Valentin was given a completely different mission during his internship at Arronax : continue the development of Raman spectrometry at Arronax in order to monitor the molecular changes in biological tissues due to alpha radiation. This was done under the direction of Nicolas Varmenot (ICO), Guillaume Blain and Johan Vandenborre (Subatech). “I first worked on a plutonium-238 source to find out its fluence and derive dose calculations because we aimed to relate these doses to the intensity of the spectra observed on Raman films.” The young man took the time to develop an algorithm to extract the background noise from Raman spectra. The second part of his work consisted in depositing RNA and DNA powders on slides, either diluted with water or not, in order to study the quality of the Raman films that were obtained. “This step confirmed that our spectrometer can be used for radiobiology studies, says Valentin. The next step will be to do the same thing with cancer cells and to compare the results with those in the literature.” Ultimately, the goal is to understand which processes related to cell death are due to alpha radiation in the context of vectorized internal radiotherapy. “Raman has serious assets to carry out these studies because it is a non-destructive method and it does not collect a signal due to water.” Valentin leaves to his successors an instruction manual for the device and for its analysis software.

At the beginning of the school year 2022, Maxence and Valentin will no longer come to Arronax. Both have been admitted to the exam to qualify for the DQPRM (Diploma of Qualification in Radiological and Medical Physics) delivered by the INSTN and will soon start their training in Saclay.