Nuclear medicine in Nantes at the SNMMI 2022 Meeting

A movie on the Nantes nuclear medicine cluster is being shown throughout the SNMMI international congress being held in Vancouver from 11 to 14 June 2022. 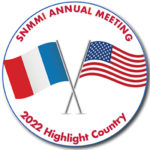 From bench to bedside: The uniqueness and maturity of the Nantes’ Nuclear medicine community have not escaped the attention of the SNMMI meeting organisers. The 2022 edition of this major annual event for the world’s nuclear medicine stakeholders is taking place in Vancouver from 11 to 14 June. France is the highlight country for this meeting.

Several researchers and clinicians from Arronax Nantes‘ member teams, LabEx IRON and SIRIC ILIAD have come to present their work and meet their peers. They will also be seen on the big screen, as the main stakeholders in a 6-minute film presenting the Nantes cluster dedicated to research and development in nuclear medicine. The movie will be broadcast at the congress on the SNMMI TV channel throughout the event and is available online on YouTube.

The strength of the Nantes community in nuclear medicine also lies in its basic and pre-clinical research activities, as shown by the CRCI²NA researchers. In their interviews, François Guérard illustrates the development of astatine chemistry and Sébastien Gouard presents the CIMA imaging facility. Being able to produce radiopharmaceuticals from A to Z, thanks in particular to the Arronax cyclotron and an on-site annex of the Nantes University Hospital’s Internal Use Pharmacy, is undoubtedly an additional asset for the site, says Mickaël Bourgeois, radiopharmacist at The Nantes University Hospital. Ferid Haddad, Director of GIP ARRONAX, gives the closing remarks, highlighting the multidisciplinary nature of the Nantes network and reaffirming, on behalf of all, the ambition of the community to continue to participate in the development of nuclear medicine.

The video was shot in Nantes in January 2022 by the production firm Websedge. It was funded by the GIP ARRONAX, the SIRIC ILIAD and the LabEx IRON.