After submission of a scientific project in 2001, the Arronax cyclotron reached full power on 25 October 2010 and has been operational since 2011.

2001: scientific project submitted by Jacques Barbet, Jean-François Chatal, Jacques Martino and Yves Thomas to the scientific regulating bodies and potential financiers
3 May 2002: the Ministry in charge of Research, after consulting scientific experts from the CNRS, Inserm, the CEA (French Atomic Energy Commission) and universities, officialized the scientific assessment of the project
2002-2003: a technical/economic feasibility study, co-funded by the Regional Council of Pays-de-la-Loire and the State (Regional Prefecture) and led by the teaching hospital of Nantes, confirmed the technical feasibility of the project and evaluated more precisely its investment and operating costs
18 December 2003: the project, led by the University of Nantes, supported by minister François Fillon and by the President of the Regional Council of Pays-de-la-Loire Jean-Luc Harousseau, was approved by the CIADT (the interdepartmental committee for regional planning and development)
9 July 2004: Jacques Auxiette, then president of the Regional Council of Pays-de-la-Loire, supported and launched the project, which was to be installed on the north site of the teaching hospital of Nantes, on a plot provided by the teaching hospital. The State delegated project ownership to the Regional Council of Pays-de-la-Loire
end 2004: the final investment, estimated at €36.9 million, was apportioned as follows:

2005: precise definition of the facility and public procurement orders issued
7 December 2006: cornerstone laying
March 2008: the cyclotron arrived at Saint Herblain then was assembled, tested and adjusted
7 November 2008: inauguration of the cyclotron and the ARRONAX site in the presence of Prime Minister François Fillon, the President of the Regional Council Jacques Auxiette, the Deputy and Mayor of Nantes Jean-Marc Ayrault and the Senator and Mayor of Saint Herblain Jean-Charles Gautier

2011: the cyclotron was used for research and development to produce Strontium-82, Copper-64, Germanium-68 and Scandium-44, and for radiolysis, radiobiology and physics

2017: opening of the Internal Use Pharmacy Annex (APUI/CHU and GIP Arronax) 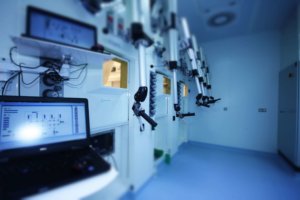