TWENTY THOUSAND LEAGUES UNDER THE SEA

ARRONAX is an acronym for Accelerator for Research in Radiochemistry and Oncology in Nantes-Atlantique X. The cyclotron is thus named in homage to Jules Vernes. Because it is in the novel by the well-known native of Nantes entitled ‘Twenty Thousand Leagues Under The Sea‘ that the name Aronnax appears. 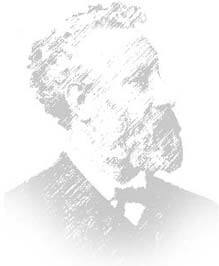 The French scientist Pierre Aronnax, accompanied by his faithful manservant Conseil, embarks on an American frigate to hunt for a sea monster. With master harpooner Ned Land, they find themselves aboard the Nautilus, which is none other than a submarine captained by Captain Nemo, and go on a journey under the sea.

Here is the plot:
The year is 1867. A mysterious giant narwhal has been spreading panic on the seas all over the world for several months. French professor Pierre Aronnax, his manservant Conseil and Canadian harpooner Ned Land embark aboard a frigate called Abraham-Lincoln chartered by the American government to hunt down the monster. They quickly discover that the creature is in fact a submarine ship, commanded by an enigmatic character called “Captain Nemo”. Aboard the “Nautilus”, the three men follow Captain Nemo in a fabulous journey at the bottom of the oceans. 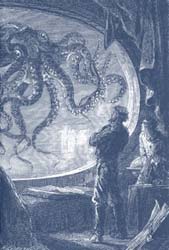 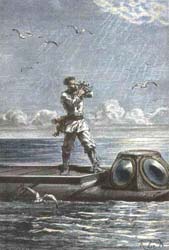