The Arronax accelerator is a variable azimuthal field cyclotron capable of delivering several types of particles (alpha, protons, deuterons) at kinetic energies of up to 70 MeV. These particles are used to produce radioisotopes and for research in various different fields such as radiolysis, radiochemistry, radiobiology, physics and particle detectors.

The wide range of particles, energies and average intensities (number of particles per second) available make the Arronax cyclotron a quite unique tool in 2018.

Eight lines of beams arranged in opposing pairs around the cyclotron can be used for experiments and for the production of radioisotopes. 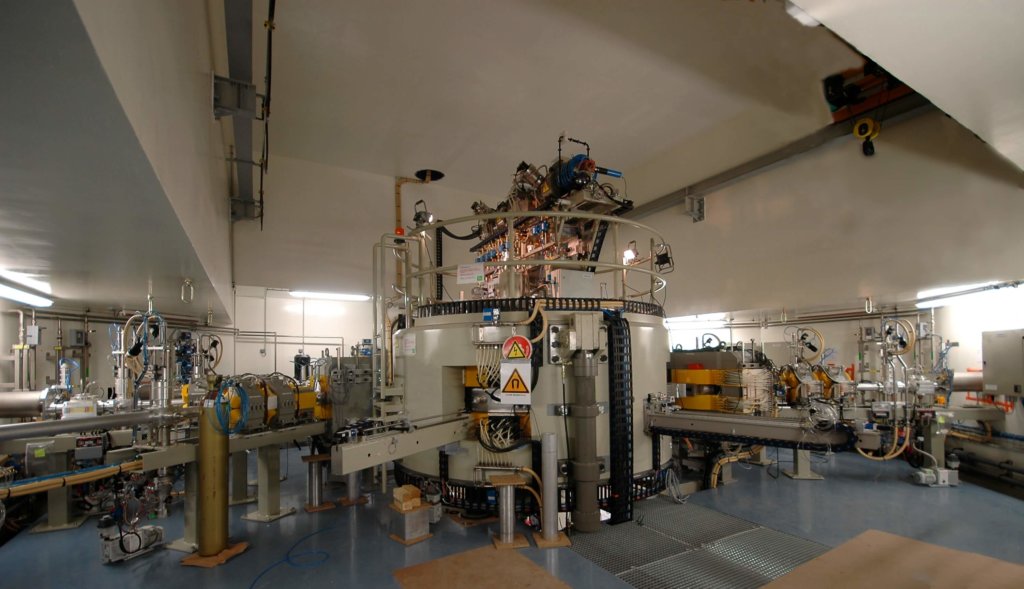 The Arronax cyclotron in its hot cell.

The characteristics of the Arronax C70 cyclotron

The range of uses of the accelerator is described in innovative radiation techniques.

The Arronax cyclotron is situated in a central hall. It is separated from the hot cells of the targets and experiment by walls several meters thick.

Three-dimensional plan of the cyclotron surrounded by the six lines of beams. In yellow: the magnets. The low-current search line is recognized by a division into 3 additional lines. 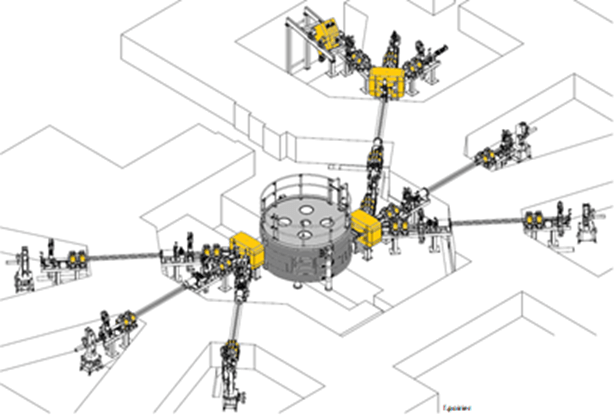 Table 1 : Characteristics of the Arronax cyclotron.

The Arronax cyclotron only delivers positive particles in the form of packets to the radiation and experimental stations at the end of the line.

The facility is subdivided into several sections:

From the source to extraction

Schematic view of the accelerator’s sections

The initial particles are created in two distinct sources placed on top of the accelerator:

They are obtained through:

The particles are output in a continuous stream. This stream of low-energy particles has a dimension (size) and angular distributions mostly in the same direction and specifically dependent on the state and settings of the source.

All these particles are accelerated at some tens of keV (~40 keV for proton, ~20 keV for the others) and sent into the vertical section know as “injection”, which prepares the packets of particles with the aid of several magnetic elements. These magnets modify the direction and size of the beam so that its dimension and positioning is optimal when it reaches the center of the cyclotron.

The injection has diagnostics but also a “buncher” that determines the initial longitudinal size of the packets. This is synchronized with the Radio-Frequency (RF) of the cyclotron and serves to create the packets that will be accelerated in the cyclotron. The use of a radio frequency field for acceleration in the cyclotron, which imposes longitudinal acceptance, enhances the distribution in packets.

Pulsation of the particles

With the standard functioning of the accelerator, 30.45 million packets per second are sent towards the targets. At Arronax a system called pulsation can be used to limit the number of packets accelerated (sent). This system relies on a “chopper”, which chops the packets in the accelerator’s injection. In practice, two parallel plates under high voltage deviate the packets so that the accelerated ones can be selected. This produces trains the period and length of which can be modified (see below). This results in an average intensity <I> that can be modified via this system.

The use of pulsation modes leads to trains that each contain a number of accelerated packets. Each train comprises packets spaced out by 32.84 ns.

To find out the temporal parameters of the pulsation, please contact us.

The packets or particles are deviated from the vertical direction to the horizontal plane of the cyclotron by a spiral deflector. This deflector, which is divided into several parts subjected to several thousand volts, is shaped like a spiral.

Ejection occurs according to the charge of the accelerated ions.

For negative ions (H– and D–), which are surrounded by a cloud of two electrons, an electron stripper is used. It is placed inside the cyclotron and is thus subjected to its global magnetic field. The ions then become positive and their trajectory is the opposite of the one they had before interacting with the stripper. The electron stripper is a sheet of carbon a few hundred nm thick.

For the positive particles (He2+ and HH+), an electrostatic deflector (generally at 66kV) deviates the particles towards the extraction boxes and the beam lines.

The GIP ARRONAX has six hot cells, each having at least one line of beams. These beam lines compound magnetic elements such as dipoles or quadripoles, which maintain the particles in the beam tube, which has a hard vacuum of roughly 10-6 mbar.