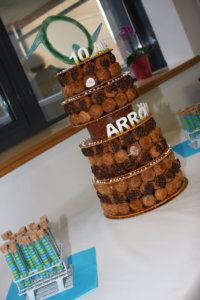 The event celebrating the anniversary of the installation of the ARRONAX cyclotron took place on March 12, 2019.

The official speeches emphasized the originality of the activities of ARRONAX and its teams, praised its leading role in setting up a sector in the field of nuclear medicine, and reviewed the cyclotron’s achievements since its installation in 2009. A federative structure through the ArronaxPlus equipment of excellence and the originator of a dynamic multidisciplinary process in research and for education, the GIP Arronax has also established itself as an essential partner for the IRON and IGO laboratories of excellence of the I-SITE NExT. This high-energy cyclotron is also a remarkable facility designed to fit in with the national scientific networks and an unquestionable asset for attracting research teams to Nantes.

The first round table focused on the conditions in which the initial project was prepared and the cyclotron installed, with personal accounts from Pr Jean-Luc Harousseau and Jacques Auxiette, in turn presidents of the Region, from Pr Jean-François Chatal, one of the three project leaders, his adviser Pr Yves Thomas, and François Gauché, tasked with implementing the project. 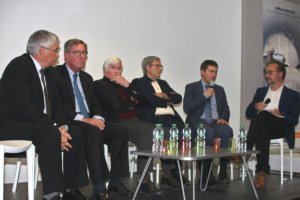 The second round table brought together the representatives of each member institution of the Arronax Public Interest Group (GIP): Olivier Laboux for the University of Nantes, Laurence Le Coq for the Institut Mines-Télécom Atlantique, Reynald Pain for the CNRS, Frédéric Delaleu for the Inserm, Anne Royer-Moes for the teaching hospital of Nantes and Jean-Luc Harousseau for the ICO. 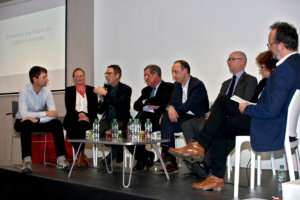 The event ended with a guided tour of the facilities led by its director, Pr Férid Haddad. 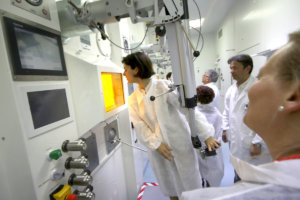