SMILES means Mass Separation Coupled with Laser Ionization for Environmental and Healthcare Applications (in French : Séparation en Masse couplée à l’Ionisation Laser pour des applications Environnementales et en Santé). It is also the name of a project submitted by the Subatech laboratory to CPER 2021-2027 and which consists in implementing this technique within the Subatech laboratory in collaboration with the GIP ARRONAX, in order to quantify, purify or separate isotopes.


Resonant laser beam ionization, first demonstrated and tested at the LNPI (Leningrad Nuclear Physics Institute) in 1988 and at the ISOLDE (Isotope Separation On-Line DEvice) facility at CERN in 1990, selectively and efficiently promotes atoms and molecules in their excited and photoionized states. Atomic selectivity is obtained by a multiphotonic process of combining laser frequencies specific to a given element. All atoms in the ground state exposed to the laser flux are therefore selectively ionized. When laser resonant ionization allows isotopes to be selected according to their charge Z, the application of the electromagnetic field allows their separation according to their mass A. Thus, by coupling laser ionization and magnetic separation, it is possible to achieve a high efficiency of isotope separation.

This technique is already used in research, in particular in the ISOLDE experiment at CERN. But unlike the latter, the Nantes device will be dissociated from the accelerator and designed independently of the radioelement production part. It will be adapted to experiments on stable isotopes or radioisotopes with very low activities.

Based on data from the literature, research and development work has already begun, notably on the ion source of such a device. Currently, the majority of the ion sources used are derived from the ISOLDE RILIS source. The laser ionization is performed in a hot metallic cavity where the atoms of the sample penetrate. The high temperature of the cavity limits the adsorption of the ionized species on the walls and favors the expansion of the neutrals but also generates a competing phenomenon of surface ionization. One of the limitations of current systems is the ionic contamination generated by this surface ionization which reduces the extraction yields of the species of interest. Thus, other techniques have been devised to improve these sources, notably on the mode of release and entrainment of the sample before laser ionization such as, for example, laser desorption for which first experiments have been initiated. Some experiments will be carried out in collaboration with teams from Mainz (Germany) and MEDICIS CERN (Switzerland). 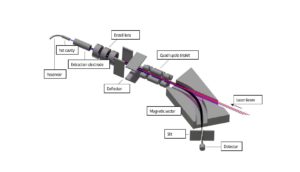 Simulation with SIMION software of the complete device

Multiple applications, especially in the field of health

The applications of this device are multiple. In nuclear physics, they may include the production of radioactive beams of exotic elements in order to study their nuclear properties (hyperfine structures, nuclear moments, radioactive period), the preparation of isotopically enriched targets or the extraction of radioisotopes of interest for nuclear medicine (use in cancerology for diagnosis or therapy).

This technique also allows the analysis and determination of isotope ratios for environmental or materials chemistry applications. Isotopic geochemistry has experienced a major boom in recent years. One of its objectives is to quantify the impact of human activities in the environment, particularly in the water environment. The transfer processes of metallic contaminants (Cu, Pb, etc…) are characterized at different scales (between soils and plants, rivers and oceans…) by the evolution of their isotopic ratio. The intensification of these studies results from instrumental developments in the field of analysis. The high-resolution ICP-MS allows the measurement of isotope ratios of previously inaccessible elements. However, an upstream chemical separation is often necessary to reduce the impact of isobaric contaminations. In order to avoid these isobaric contaminations, a possible technique to track the origin of polluting metals in the environment is resonant ionization by laser beam.

Towards an optimized production of radioactive copper

First applications of this device will be dedicated to the quantification and separation of copper for environmental sciences and for nuclear physics applied to medicine. The precise isotope ratio of copper masses 63 and 65 is, indeed, a geochemical and biogeochemical tracer very useful in oceanography. In addition, they are considered contaminants to be avoided in the production of copper isotopes of mass 64 and 67, which hold promise for applications in nuclear medicine. Measurements of effective cross-sections of stable copper atom production can be obtained, valuable data to optimize the quality of radioactive copper production and to constrain nuclear codes.

Keerthana Kamalakannan’s thesis entitled “Development of a mass separation device with laser ionization: applications to copper for medical and environmental purposes”, funded by the GIP ARRONAX, was launched in October 2020 and kicked off the SMILES project. This thesis will take place mainly in the Subatech laboratory where the first prototype of this device will be installed with the help of members of the PRISMA and Radiochemistry teams. This work will eventually lead to a second prototype adapted to high activities and allowing the separation of radioisotopes dedicated to radiopharmaceuticals produced by the ARRONAX cyclotron.